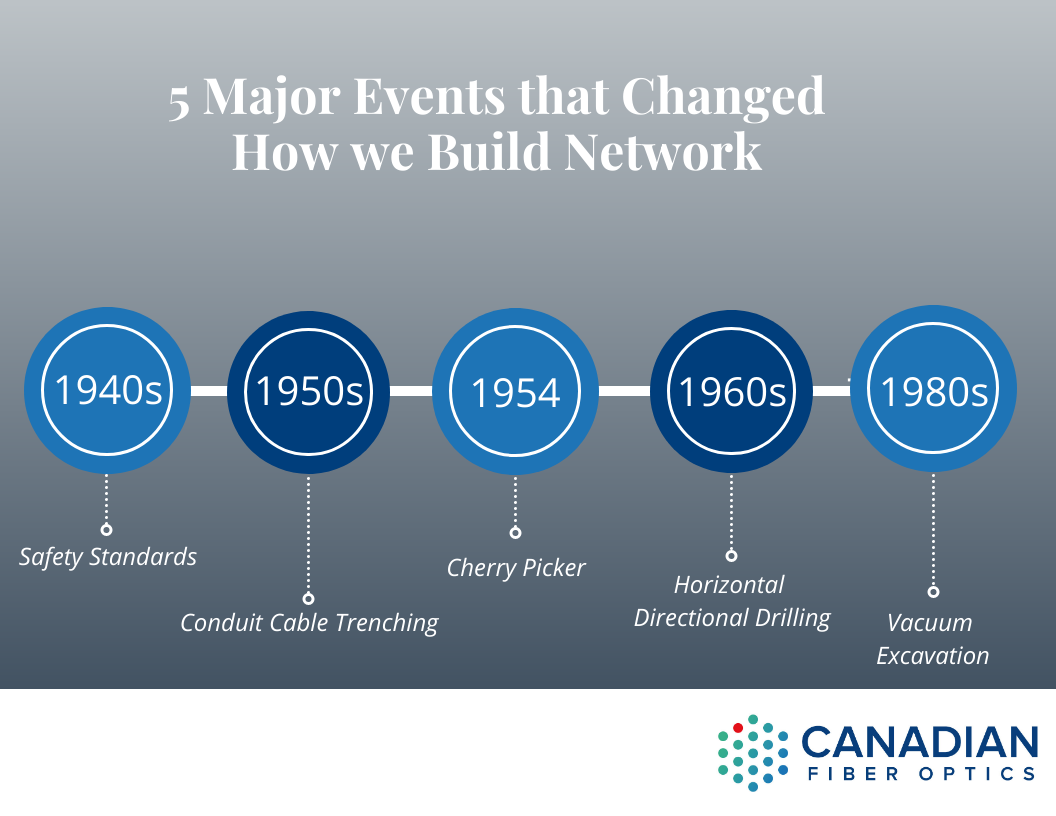 5 Major Events that Changed How we Build Fiber

Over a century has passed since the world lived in darkness. Networks were first built in the 1840’s through the widespread use of the telegraph, then the invention of the telephone came in the 1870’s. However, the start of national electrification in the 1890’s acted as a catalyst of massive continental network expansion.

Here is a quick recap of 5 major events that led to how we build network today.:

As the public became more dependent on electricity, so did the requirement for electrical grids to be reliable. This meant they had to be repaired quickly.

Prior to 1940, approximately 1 in 3 linemen were killed on the job – mostly from electrocution! This drove stringent Safety Standards and led to the creation of important labour organizations.

The need for more reliable networks meant that working conditions needed to improve. In other words, linemen couldn’t die doing it. Source: https://lowellcorp.com/evolution-of-the-lineman/

The rest is history.

The Cherry Picker was invented as a platform to (you guessed it) pick cherries in the 1940’s, but it was very quickly adopted by electric utilities, where it is often referred to as a Bucket Truck. The Bucket Truck not only improved safety, but also allowed for rapid aerial network deployment.

The direction drill, or “trenchless technology” was an idea of Martin Cherrington in the early 1960’s. Although the first direction drill looks very similar to what they look like today, it was technologically limited, as it did not have the electronic locating we have today.

Today, it’s rare to see an urban Fiber to the Home (FTTh) project happening without the use of a directional drill. Aside from it’s obvious advantage of being able to pull cable and duct under road surfaces and driveways, HDD significantly reduces costs associated to any soil disturbance.

Hydro excavation started in the mid 1800’s as a mining process – then called Hydraulic Mining. Fast forward to the 1990’s, “Hydro Vac” machines became more sophisticated as they became mounted on trucks and trailers.

By the mid 2000’s, they become a common site on many utility operations and in the past decade, they are a key piece of equipment in keeping our underground contractors safe, and existing utilities untouched.

There’s too many to count, but we want to hear yours! Technological advances are continually changing the way we build int his industry, so we’re excited which field trial will prove to the next greatest invention.

About the Author: Johann Reimer